Skip to content
Loading...
Latest news
Returning to Kazakhstan in the Middle of the Global Pandemic: Reflecting on My Experience
Covid-19: Virtual Field Trip to Vietnam
Positive Changes in Inclusive Development Policy of Vietnam Government with Giay Ethnic Minority in Sapa Over the Past Years
Vietnam’s Strategy in Fighting COVID-19 Pandemic
Raising Awareness for Young People about Sustainable Environmental Protection
Vietnam, From Teaching Each Other Our Cultural Dance Moves To Introducing One Another To The Varying Tastes In Music
Mental Healthcare Amid The Pandemic In Vietnam
How Has Climate Change Impacted Vietnam?
Vietnam’s Spectacular Development
Interning with DEN: Reflecting on my Experience
Student Journeys 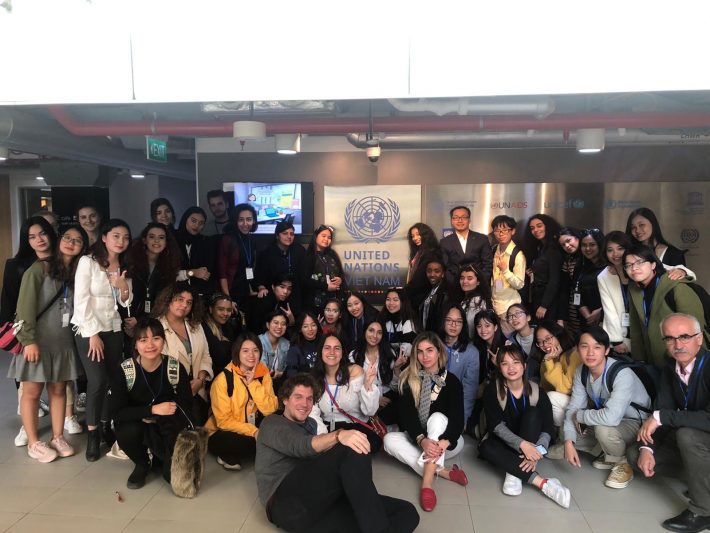 They say that a picture is worth more than a thousand words. In this series of photo essays, Mahnoor Shahid and Tasneem Fadel will be taking us on a special journey that recalls some of the instances and unique moments of their recent educational trip to Vietnam. Through their photographs, they will share a creative reflection of some of the most striking, interesting and enjoyable aspects of Vietnam’s society, culture and politics.

Vietnam. Located in South East Asia, has to be one of the most astonishing countries that you will ever visit. Whilst there, I learned so much about the community, the people and the way in which they live their lives. For a fact I could say we all resonated with the feelings that, upon arriving there we had one view, but when leaving we were confused. Such a country is Vietnam. Though plagued with a past of consistent war, the country is nothing like the stereotypes built on its communist nature. The citizens of Vietnam have a fightingspirit, kind and welcoming. 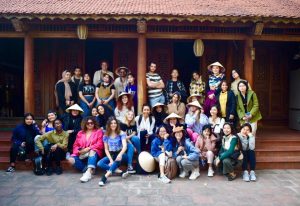 My fellow classmates, the Vietnamese students from Hanoi university and I visited “Cuu Village”. It was a very interesting experience, where I got to see the traditional values and architecture of one of the oldest village in Hanoi. Upon arriving, all you can see is the country side, lots of grass and rice fields. It was also very hot, most of us wore traditional Vietnamese hats called the “non la”, and this gave us a sort of traditional feeling. It’s very common to see people wear these hats within Hanoi, especially the people from the elder generation. Once in the village, there were many traditional styled houses. An elderly woman had invited all of us inside to see what her house looked like, it was really beautiful, and she had a garden inside her house, which was well looked kept. For a village that’s been there for one hundred years, the architecture looked well-structured and still strong. 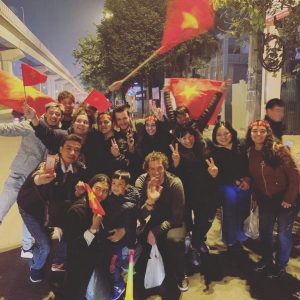 Vietnam had just won the football match, for the first time in thirty years. It was personally my most favourite day there as the whole country was in celebration. The unification of everyone celebrating, all happy and joyful is one that I will remember for a life time. The streets were filled with people waving the Vietnamese flags, blasting music and chanting. I had never experienced anything like this in my life. There were motorcycles everywhere, the roads packed with people. I had a headband on, and I joined these wonderful people, I raised the Vietnamese flag in celebration and walked the streets with my class fellows chanting away. It was beautiful to see everyone together, people had even stopped to thank us for celebrating with them. The human interaction was so empowering. There was a point where random people would high five each other, and I never high-fived that many people in my life, everyone was just so happy. People were out there taken pictures with each other, dancing and singing and overall enjoying an amazing time together. Cars were going around and people were standing on top of them waving the flags, it was amazing to be part of such a happiness for the country. 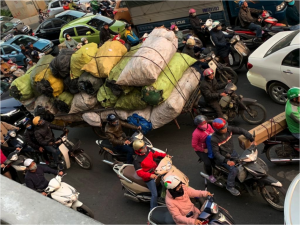 In Hanoi, there were many motorcycles, about five million in just that city itself. The Vietnamese citizens also use “Grab bikes” which is a motorcycle taxi, relatively at a cheap price. Crossing the roads, were problematic as it was not safe. However, the people on the motorcycles manoeuvred their ways around us. The motorcycles would not only be on the road, but sometimes would use the pavement as a path to use their cycles on. With my personal experience, when I was with my friends, the traffic did not stop for us, so when crossing to get on the other side, we were very nervous but it was a fun experience. The Vietnamese students encouraged us to cross without worries as the bikes would go around us, when actually doing it there was an adrenaline rush that hits, this is because it is different in the UK, with there being traffic lights everywhere, though that was not the case in Vietnam, there were only traffic lights at the main junctions. 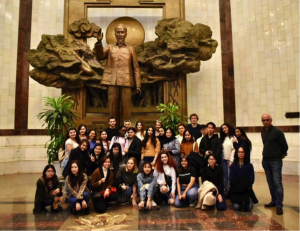 In this picture, we went to the Ho Chi Minh Museum. Ho Chi Minh, was the founder of communism in Vietnam. He is regarded with great respect. The museum was very informing and had lots of information about the history of Vietnam. For instance, the history of communism, the influence of the French, Ho Chi Minh and his endeavours around the world, and there was a map to show all the countries that he had visited to gain an insight of which concept would be better to use to then lead the country with. It was interesting to learn about Ho Chi Minh and the foundations of communism. There were very strict rules when visiting the final resting place of Ho Chi Minh. No one was allowed to smile, hands were to be kept at the side and no shorts. This was all part of the respect that had to be upheld. 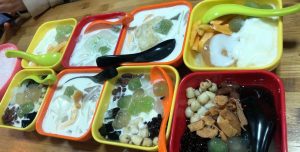 One outing with the Vietnamese students included my friends and me trying out some of the traditional Vietnamese desserts with them. With the regards to the food, Vietnamese cuisine consists of French infusions due to the colonisation. But there are also the traditional aspects, such as rice, pork, fish and vegetables etc. It was a struggle to get use to the food there, especially since being a Muslim entails not being able to eat meat that is not “Halal” (permissible to eat). In that regard, there was no halal meat, but there were vegetarian options, such as pizza, or rice with vegetables. The dessert had no meat so was okay to eat, it had a very unique taste.

Overall my time in Vietnam was memorable, I enjoyed and had the best time of my life. Meeting and forming friendships with different people and being part of the culture, experiencing the traditions, and tasting the cuisine of Vietnam will be something that I will remember for a life time.