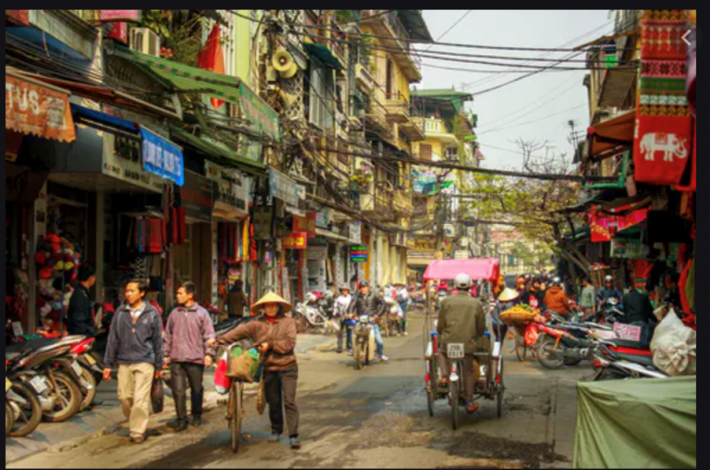 My perception of Vietnam so far has been, I must admit, rather parochial. When I envision it in my mind, I see the bustling streets of Hanoi, rich with colour and activity: the movement of tourists and pedestrians and hawkers, the chatter punctured by the occasional toot of a motorcycle horn. Or I see a scenery of bucolic bliss, of verdant valleys and terraced paddy fields, of a smile shared under a conical straw hat after a long day’s work. And oh, the food– my mouth waters just thinking of it. I think I know what my very first order would be: fresh green papaya salad, a hearty bowl of pho, and some delicious Vietnamese iced coffee to help with the subtropical humidity.

It’s easy to romanticise a place and culture you have never visited. Of course, Vietnam has many wonderful qualities– some which fall into the archetypal imagery of would-be backpackers like me, some which I will discover only when I have seen and heard and smelt and felt the heart and soul of the country, and some which may remain elusive forever to any non-local. These are qualities that need preservation, for the sake of heritage but also for the livelihoods and wellbeing of the 96 million people that call Vietnam home. Vietnam has enjoyed positive rates of economic growth over the past few decades, after casting away the shackles of colonial French-Indochina and later rising slowly but surely from the ashes of the infamous 19-year-long Vietnam War. Economic and ethnic disparities are something Vietnam continues to grapple with, but it is investing in its top-performing sectors–agriculture, tourism, and manufacturing– in order to maintain its developmental incline.

However, there is a source of looming danger to the attainment of these developmental goals and the preservation of Vietnam’s beauty and prosperity: climate change. Climate change is a global issue that has global repercussions, but the geographical and socioeconomic dynamics of certain regions make them more vulnerable to climate impacts than others. Vietnam, in particular, is among the world’s most exposed to the possibility of having to tackle issues of rising sea levels, changing patterns of rainfall and the likelihood of drought, and extreme weather events such as floods, typhoons and tropical storms. This poses issues for all industries, but especially for the tourism sector and the agricultural, forestry and fishing sector, which account for around 12% and 15% of Vietnam’s GDP respectively. Other than impacting the livelihoods of millions, it also disproportionately disempowers the poor and marginalized. For instance, erosion of coastal land and flooding in some of its most-populous deltas has already displaced many: in 2018, more than 35,000 from the Mekong Delta were forced to relocate every single day.

The idyllic countryside, the charming city streets and the delectable cuisines that I dream of deserve to be there fifty or a hundred years down the line. But most importantly, security and standards of living and an intact homeland for the Vietnamese people– the country’s life and blood– deserve to be safeguarded for as long as humanly possible. A decisive step in Vietnam’s climate action must be to commit to reducing its own greenhouse gas emissions and promoting a circular economy as much as it can in line within its sustainable development framework. It will be a gargantuan challenge, no doubt, but also an incredibly meaningful one for its citizens and all of humanity. But as important and time-sensitive is the need to develop a robust national strategy for climate resilience and capacity-building. This needs to be done foremost to protect its poorest and most powerless communities; but in designing a powerful resilience framework, it must also address measures to cushion risks in the financial and industrial sectors which face damages from climate factors but also from transitional regulations and volatility as Vietnam and the wider world set out a roadmap to a green economy. Although Vietnam is already taking some steps towards these ends, it may be likely that efforts will be renewed and amplified after the international COP-26 meeting in November of this year. This will also ideally be an opportunity for the international community to strengthen solidarity in the fight against climate action for high-risk developing nations such as Vietnam.