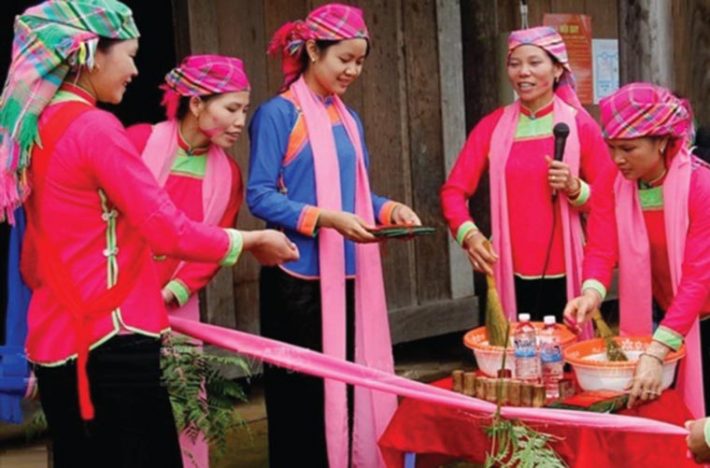 Hello, I’m Huong, a student at Faculty of International Studies, Hanoi University. I am Giay – one of 53 ethnic minorities in Vietnam (0,07% of Vietnam’s population). I was born in Ta Van village – Sa Pa town – Lao Cai province, a village with 67.07% Mong, 25.48% Giay, 5.53% Dao ethnic groups and 366/849 poor households (Summary report on Ta Van Community Tourism Management Board activities in 2018). Today, I will share some of the positive changes in the inclusive development policy of the Vietnamese Government with ethnic minorities including the Giay ethnic group in Sa Pa in the past years. 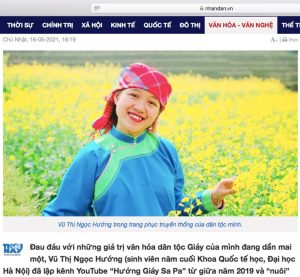 “Huong Giay Sa Pa” on Nhan Dan (People) Newspaper – central organ of the Communist Party of Vietnam and the voice of the Party, State and People of Vietnam.

Vietnam as well as developing and developed countries in the world focus on sustainable and inclusive development. Since Doi Moi, Vietnam has achieved certain achievements in inclusive growth, including creating conditions for equal development and social integration for disadvantaged groups such as women, ethnic minorities, women and disability.

As an ethnic minority person from Sa Pa, I feel that in the past 10 years, my hometown and ethnic group have had positive changes in both economic and social development.

To begin with, the poverty rate in Sa Pa decreased. Despite being a tourism development district, Sa Pa still has 15/17 communes with special difficulties and has more than 95% ethnic minorities, the poverty rate is quite high, with 25.4% in 2014. However, along with the inclusive growth policy, in the end of 2019, this rate has decreased to only 18.5%. 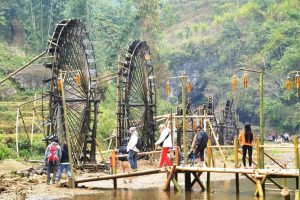 It can be seen that it is part of the result Directive No. 40-CT/TW of the Secretariat of the Vietnam Communist Party Central Committee on strengthening the leadership of the Party over social policy credit. This loan has been helping the people of Lao Cai in general and Sa Pa in particular to develop sustainable economy. Specifically, the credit growth in the five years from 2014 to 2019 of Lao Cai is VND 985 billion, the average annual growth rate is 10.6%/year. The source of policy credit at the Bank for Social Policies in Lao Cai has contributed to the development of buffalo and cow husbandry, bringing the total herd of cattle in the province to over 667 thousand heads, poultry over 3 million heads, afforestation and greening of bare land on 2,500 ha. Policy credit has helped more than 40,000 households get out of poverty; 44/143 communes meet new rural standards.

In addition to the Directive, the projects of NGOs also contribute significantly to the development of ethnic minorities. For example, project to Support the Social Enterprises for the creative and sustainable rural development (SERD) of CSIP – The Centre for Social Initiatives Promotion applied the innovative and creative approach of social enterprises in solving economic and social problems in rural and mountainous areas. In 2016-2019, the project was implemented in areas with the highest poverty rates in Hoa Binh and Lao Cai provinces, including Sa Pa. According to CSIP, after 3 years, the project has intensively supported business administration and development for 41 community social enterprises (of which 82.5% are women-owned, 90% of which are owned by ethnic minorities); implementing 63 business development and consulting packages. In addition, the project created jobs and increased income for 1,168 disadvantaged workers, benefiting 13,707 people in the community; 44% of units have outstanding revenue growth of over 20%/year.

Besides poverty reduction, other issues of ethnic minorities and mountainous people have also been improved. I noticed that my village has been greatly upgraded, the material and spiritual life of the community has improved significantly.

After 10 years of implementing Vietnam – National Target Programs for New Rural Development and Sustainable Poverty Reduction Support Program (NTPSP) in the 2010-2020 period, Sa Pa has had 176 km of newly opened concrete roads, nearly 130 km of cement roads, 100% of communes have asphalt and concrete roads to the commune center, dozens of cultural houses have been renewed, upgraded and repaired; 580 new temporary houses, over 3,800 houses repaired.

In addition, the post and telecommunications network has reached to remote areas. For example, about 15-20 years ago, TV was not common in my village, then 10 years later, most of the families in Ta Van had TV to watch. At present, most families have internet, Wi-Fi and modern electronic equipment, even the two most difficult and remote villages of Ta Van now have signal and network to use. According to my observations in Ta Van, on average, at least 50% of people in the family have a smartphone in 2020.

Furthermore, education and preservation of the community’s traditional culture have also received more attention. Many boarding schools for ethnic minorities and inter-level boarding schools are built specifically for ethnic minority students. Students will be provided with scholarships every month and studied according to unique educational program. At boarding school, students are not only trained in general knowledge but also trained and raised their awareness of their values ​​as well as preserving and developing community’s culture. An example about my own experience, an ethnic minority who graduated from ethnic boarding schools in Sa Pa district and in Lao Cai province. Teachers and government have created conditions and hope that I will continue to study at university and then can use the knowledge and skills I have learned to return and build my hometown. I have a 70% discount on my university tuition fees because I am an ethnic minority in an area with extremely difficult socio-economic conditions. This policy helps me to be able to continue my university studies because the tuition fee is higher than my family income.

In general, although there are many challenges in the process of implementing sustainable and inclusive development policies, there are significant positives changes that create opportunities for all people in society, especially ethnic minorities. I believe that, in the future, inclusive growth in Vietnam will achieve more positive results, making Vietnam even more developed and sustainable.

These are some of my sharing about the inclusive development of Vietnam Government with the ethnic minorities of the Giay Sa Pa over the years. If you liked the article and want to know more interesting information about Giay culture and Sapa tourism with the locals, please contact me below!