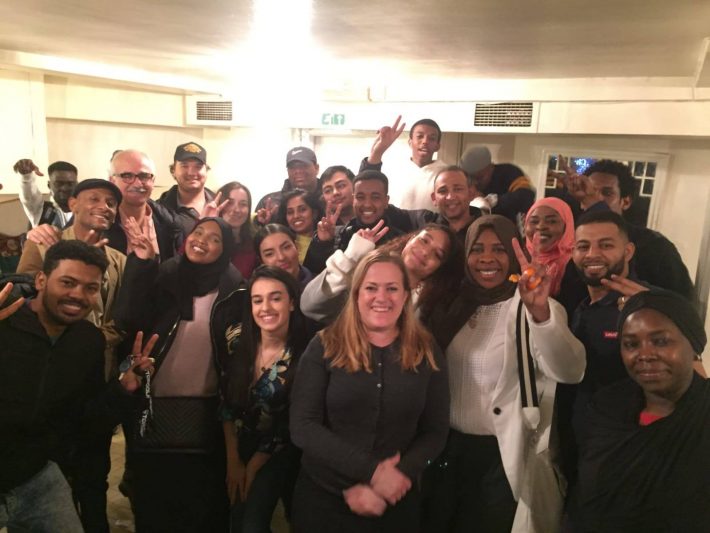 Since 2019, the Democratic Education Network (DEN) has lent its support and solidarity to the community group Hopetowns, which works with asylum seeking individuals in London – one of the most marginalised and disadvantaged groups of people in society. This is one of the communities that DEN has collaborated with to develop relationships and strengthen the university’s work in its local community. With this we aim to engage our students, to develop their understanding of history, politics and social condition, as well as their skills to manage and communicate in a real and meaningful situation. The initial contact started in 2018 and since then there have been various visits between community leaders, academics, students and refugee both in the community centre and at the University of Westminster. This short article is to demonstrate both the plight of refugees, Hopetowns and DEN’s work with them.

The support available for asylum-seekers in Britain has seen a steady decline over the past decade. Many of the refugee-related NGOs and organisations that previously supported asylum-seekers awaiting the outcome of their application are today only able to help those with refugee status (Leave to Remain). This leaves asylum-seekers, who also lack the legal right to work, in an incredibly vulnerable and marginalised position which also risks delaying their potential future integration into society. London as a capital city has traditionally been a hub for refugees and migrants from all over the world. As early as the 18th century the arrival of Huguenot refugees (French Protestants) in Brick Lane, followed by hundreds of Irish people forced to leave by the Potato Famine of the 19th century; Jewish families escaping persecution in the early 20th century; finally becoming the cultural hub of London’s Bangladeshi community.

Just like in the 18th and the 19th century, asylum seekers continue to be isolated, alienated and struggle to develop friendships and find meaningful support. This can have a significant impact on their physical, mental health and wellbeing. Once granted refugee status, many more face the risk of destitution due to the Government’s so-called move-on-period, which essentially gives newly granted refugees 28 days to find their own accommodation, being evicted from their previous asylum accommodation without further ado. This is a difficult period for many individuals, who struggle to access the housing market due to lack of knowledge of how it functions and also due to unwillingness among some landlords to host refugees. On top of this, many struggle to open a bank account as swiftly as required to rent a room, and so on.

The Hopetowns Model of Community Support

In this context, Hopetowns fills a crucial gap and helps to alleviate some of the hardships experienced e.g. during long periods awaiting a decision on the asylum application, by providing a sense of security and support during uncertain times. The group also contributes towards lessened tensions and prepare individuals for the next phase of their lives. The fact that the leader – Samer Mustafa – and many of the volunteers are refugees themselves, makes the project particularly sensitive to the specific difficulties experienced by our participants, which makes their work even more impactful.

The idea of starting the Hopetowns charity project emerged from the personal experience of Samer, who arrived in the UK as an asylum seeker in 2016. While he was waiting for his asylum case here in Britain, he knew something was missing for young asylum-seekers going through the same process as himself. He therefore wanted to find a way to address the disconnection which he felt internally, and the isolation he was experiencing externally in society. For all of these reasons, he decided to start something powerful which could help people improve their lives. He mobilised his network and set up Hopetowns, to help refugees and asylum-seekers with integration into their new communities, and to help build skills to get through everyday life in Britain. Importantly, Hopetowns was also set up by Samer to “take all the stress and bad thoughts from their minds”, and to allow volunteers and refugees to join together in friendship and solidarity.

The contact between DEN and Hopetowns began in 2018 with Marta Welander, a PhD student in department of Politics and International Relations, and Zeenat Khan, Development and International Relations student. This relationship has continued over the years with a range of activities together, from various visits, to writing articles and invitation to participate in the DEN international student conference. Last year, DEN students invited Hopetowns to a food festival, where students and asylum seekers came together to share food from around the world and create new friendships. This was followed by a visit by DEN, including its Academic Director Farhang Morady, to the Hopetowns community centre in Maida Hill where another food festival was held – this time organised and hosted by the asylum-seeking members of Hopetowns themselves.

More recently, DEN has kindly contributed to strengthening the quality of Hopetowns’ teaching environment, with a set of books for the Hopetowns book club. This has greatly helped the community to have a better learning environment, for the many ambitious individuals who join the group for lessons every week. DEN has also invited Hopetowns to submit a paper to its forthcoming conference in 2020, and the Hopetowns community members are hoping to exhibit their creative writing project at the conference, highlighting their experiences along the journey across Libya and the Mediterranean, as well as also reflecting about life in London.

The partnership between DEN and Hopetowns is an important one both for students and the community. It constitutes an attempt to train our students to support refugees through, teaching, developing their communications skills and above all helping them to integrate in a wider society. DEN has always been proactive in building bridges between communities here in London, to welcome newly arrived individuals who are looking for support, friendship and a life in dignity. DEN’s act of reaching out to Hopetowns is an excellent first step in fostering such relationships between the University of Westminster’s student body and communities across London.