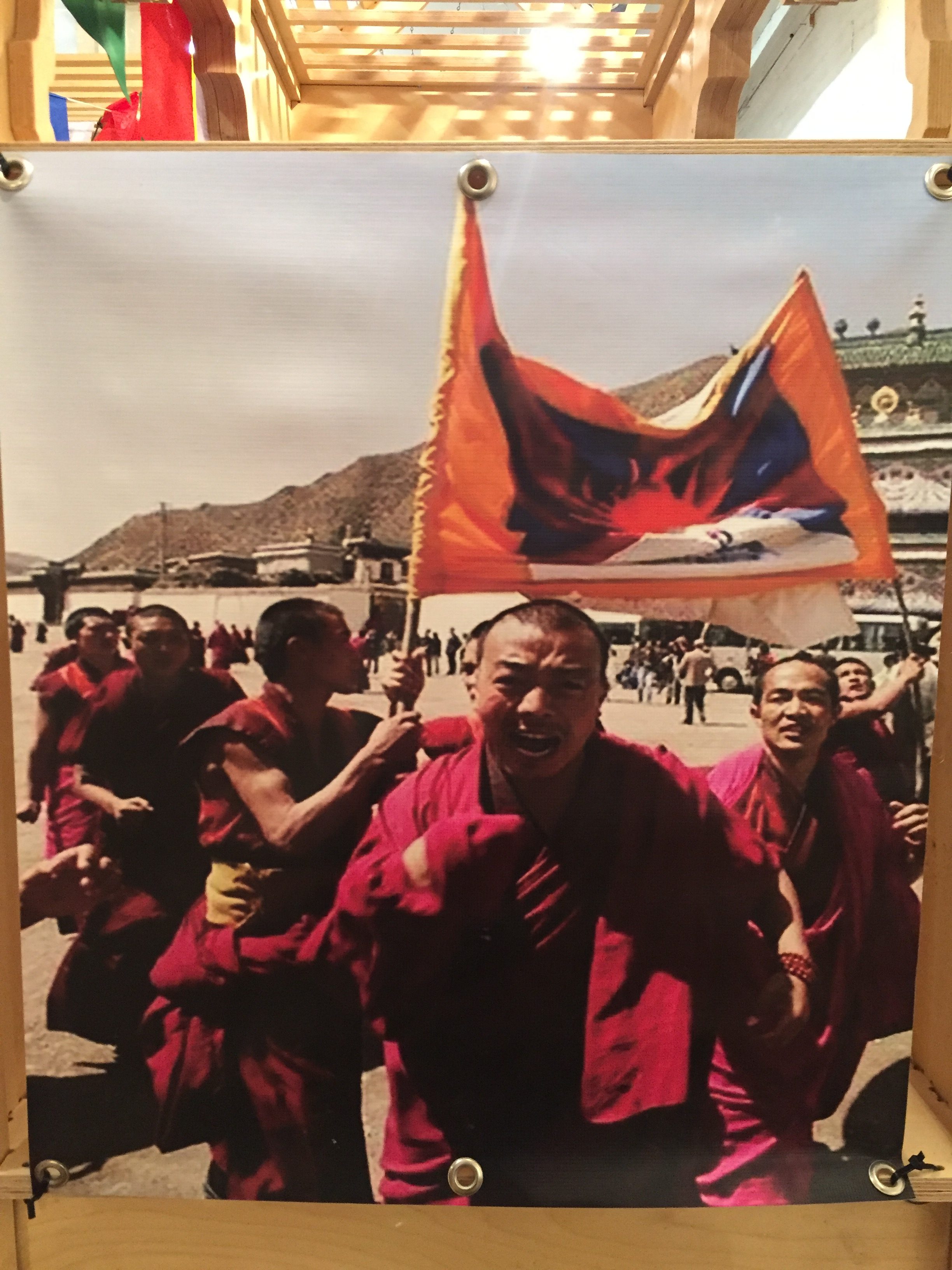 this body is yours.

But within the body

my belief is only mine.’’

The Tibetan resistance against Chinese oppression has sustained for over 58 years, beginning on 10th March 1959 when protestors were brutally suppressed by the Chinese authorities, and the 14th Dalai Lama’s life was under threat- as a result of which he was forced to go into exile. The next major uprising in Tibet broke out in 1987 continuing till 1989 with various monasteries all over Tibet joining and leading the protests. This was also the time Free Tibet was formed and, to celebrate the 30th anniversary of their formation and the 1987 uprising, they organized the first ever Tibet festival in London on 21st & 22nd October. It was also a way of celebrating Tibetan culture and raising awareness about China’s occupation of Tibet.

Organized in a non-descript street, the venue of the festival was in itself colourful, lively, musical and filled with people passionate about the Tibetan cause or willing to learn and contribute to it. With a packed schedule featuring talks, art and yoga workshops, photo exhibitions, campaigns, the event was an interesting combination of fun while inculcating a sense of responsibility, in the participants, towards the movement.

Entering into a room with wooden flooring, soothing chants of ‘Om Mani Padme Hum’ (The traditional Buddhist chant) and a larger than life sized wall hanging of the Patola Palace (Lhasa, Tibet), I was transported back to my last visit to hilly town of Dharamshala, India, where the current Dalai Lama resides. A photo exhibition at the centre of the room welcomed visitors with descriptions of Tibet, its culture, China’s occupation, unlawful prison practises and forced disappearances practised by the Chinese authorities. The monks from Gaden Ngari Khangtsen Monastery (Mysore, India) were diligently working on a ‘Compassion Buddha Mandala’, colouring it with painfully collected and coloured sand crystals. The art of making sacred sand mandalas is termed as dul-tson-kyil-khor in the Tibetan language, which literally translates to “mandala of coloured powders.” The motives are to spread love and kindness and at the end of the festival, the sand grains are gently gathered, half of which were distributed among the visitors and the rest is deposited into a moving water body.

Another floor had a Free Tibet shop selling Tibetan handmade merchandise, profits from which are directly given to the Tibetan community and contribute to the Free Tibet organization. An interesting art workshop with mandala and Buddha templates was also a centre of attraction for both adults and kids alike. The festival also featured a couple of campaigns that people could contribute to: #StandwithLarungGar campaign that aims to save the Larung Gar monastery and town from forced evictions of indigenous people by Chinese authorities in an effort to clamp down the monastery’s influence and another campaign demanding the release of unlawfully imprisoned Tibetan activists. It was really reassuring to see a lot of people devoting time to read about the campaigns and then doing the needful in the form of signing petitions, writing letters to their MPs and donating funds.

A pop up exhibition talking about different methods of torture by Chinese authorities was also put up in a dark room displaying various objects like beer bottles, hand cuffs, specially designed torture chairs. Rice was a part of the exhibition, pointing to forced starvation and extremely bad food provided to the prisoners. Listening to testimonies of prisoners being forced to drink water from the toilets and subjected to electric shocks felt like needles in the listener’s ears, piercing through the bubble of the comfort zone. A small exhibition, it was enough to open our eyes to the injustice faced by Tibetans on an almost daily basis, raise empathy and strengthen our resolution for the long fight ahead.

Workshops on different forms of Yoga and meditation were also practiced, emphasizing on combating gadget distractions and dealing with work stress. Educational talks on Tibetan history and culture were also conducted. The Office of Tibet was introduced and the contributions by different countries such as UK, Poland the Baltic countries were acknowledged. An interesting feature of the discussions was the extra time kept open for inquiries and comments by the participants where a lot of people asked how they could contribute more to the movement. The discussions were interrupted by an old woman passionately calling on the people to join her in the protests outside the Chinese embassy every Wednesday, received with applauds and promises of joining in- and a promise to keep the fight going- before the talks resumed.

The London Tibetan community joined in large numbers to extend support and celebrate their culture. Dressed in beautiful Tibetan dress, Chuba, it was heartening to see everyone join in the traditional circle dancing. Everybody from young, hyper energetic kids to old people (a few even had problems in moving) joined in! Various musical and dance events were held on both days. The second days also had a surprise visit by two Tibetan mastiffs, Yang and Zeus that quickly became the center of the crowd’s attention.

To my surprise, a few Chinese people also visited the festival and they seemed to have a genuine interest in understanding the situation. While they did complain of China’s silence over the Tibet question, they wanted to attend the festival to learn more and stand in solidarity with the Tibetans. This is often how revolutions begin, from within. Living in a time when the Kuwaiti officials asked the Israeli delegation to leave an International conference on account of their human rights abuse in Palestine, a time when many Indians are speaking out against oppression of Kashmiris, questioning abuse of power by Chinese themselves of their own government can be seen as a ray of hope for the Tibetan cause.

I only hope, the number of people who showed up for the event, the petitions signed and letters written, every single photo uploaded on social media in solidarity encourage the Tibetans to continue their struggle.

I only hope, the people of a country wiped off from the map, can find their home again.

I only hope, our scream for freedom in support with the Tibetan’s is loud enough for the world to hear.

I only hope, Tibet celebrates its Independence Day with more love and enthusiasm than anniversary of its resistance days.

I only hope, one day, we attend Tibet fest not in London, but in the foothills of Himalayas, in Free Tibet.

(You can read more about the cause or contribute yourself at www.freetibet.org .)