Skip to content
Loading...
Latest news
Experiences of the Covid-19 period for refugees and asylum seekers
Mental health during a pandemic
Worrying while working
Coping with Corona: My Experience with Confinement
Media Literacy in the COVID-19 Crisis
The United States of America was built on racism
Covid 19, a Virus that Caused Peerless Times
Towards New Beginnings Because of Covid
After 14 Days of Quarantine I Couldn’t Hug My Father
My Covid-19 Experience
Uncategorized 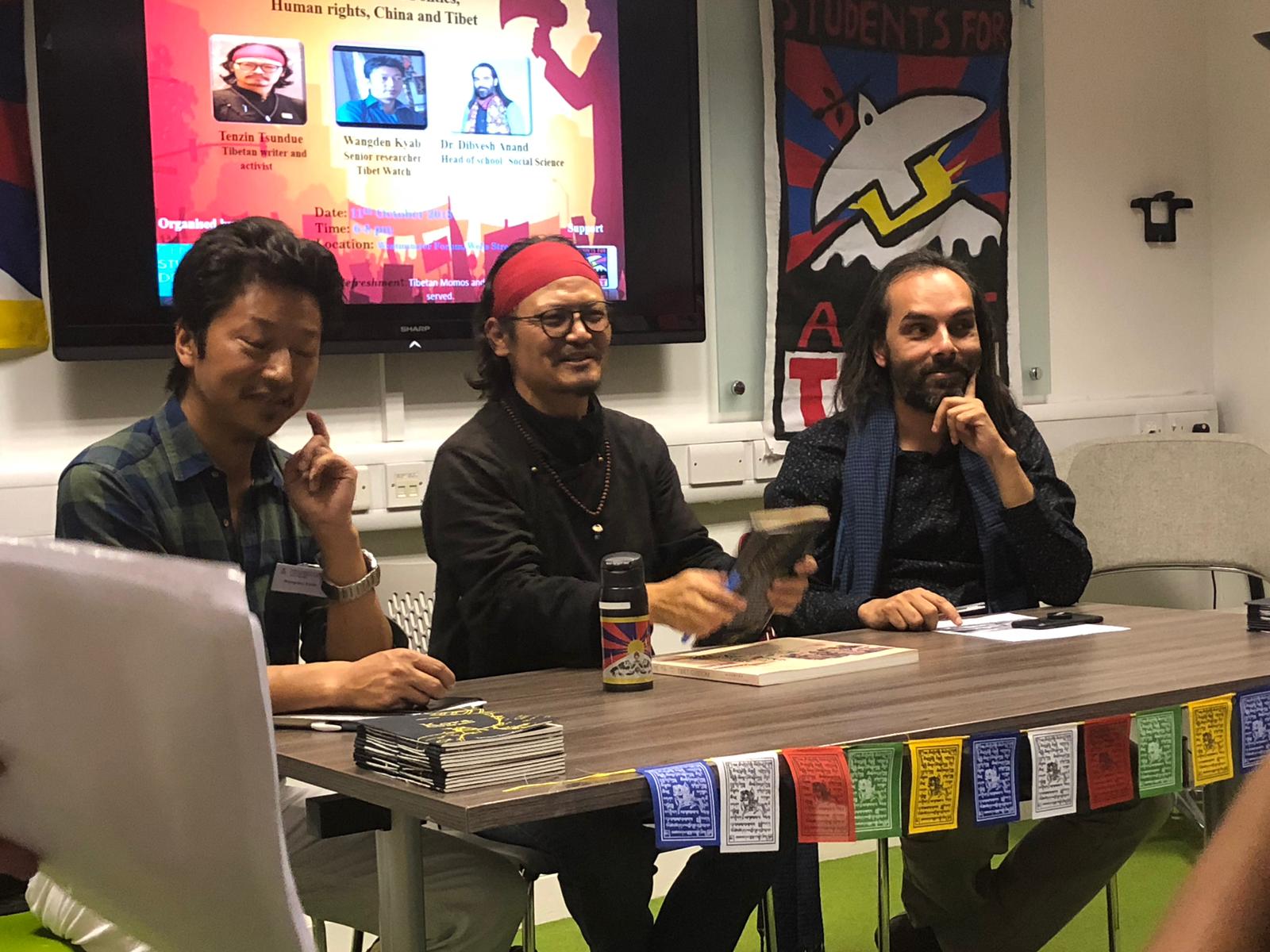 Last Thursday on October 11th, the Students for Free Tibet Society and the Centre for Study of Democracy in Westminster University invited poet-activist Tenzin Tsundue and Wangden Kyab, a senior researcher of the Tibet Watch Research Team to have a conversation with Professor Dibyesh Anand on human rights, politics, China and Tibet.

The floor opens with Professor Dibyesh’s simple yet very significant question, ‘Why should people here care about what’s happening in Tibet?’ Tenzin, who was born in India from a Tibetan refugee family, melancholically describes Tibet as a country where his parents came from and belong to but cannot return to; whose rivers flow to China, India, Vietnam, and Cambodia, giving them nourishment, yet under foreign occupation. His personal experience upon trying to return to Tibet was challenging as he was kept in custody, beaten up, and tortured. He adds how Tibet is only occupied by 10% Han Chinese but are exploiting more than 60% of Tibet’s landmass; those who trade with China benefit off Tibet, an occupied country, and therefore should be made accountable for the benefit they receive from China and must be held responsible for the Tibetan struggle as well. Tenzin describes that the world is tired of violence and that the Tibetan struggle led by His Holiness the Dalai Lama is the largest peaceful nonviolent struggle for freedom.

Professor Dibyesh asked for examples of human rights abuses which are happening in Tibet and Wangden, born in Tibet but escaped to India in 1998, whose relatives have been sent to prison and tortured answered that the issue is not only about human rights abuses but also about the survival of Tibet as a homeland and its people. The occupation does not just torture and humiliate but discriminates and marginalizes Tibetans and their culture. He further explains that thousands of Tibetans have died ever since the Chinese first came in 1949/59 but the resistance still continues till the present day. Wangden expresses that the Tibetans living in Tibet expect us to show their grievances to the world and that we should see Tibetan diaspora as a representation of Tibetan voices in Tibet while highlighting not their victimization but their resistance.

Furthermore, Professor Dibyesh questioned Tenzin on how he balances the idea of Tibet, being a Tibetan who was born outside of Tibet and is not able to come back. Tenzin answers that the idea of Tibet is present around him in the form of stories about mountains covered with snow and sheep with thick wool and in stories which his grandmother told him while growing up in refugee camps. The idea of Tibet is passed as a legacy in form of songs, stories, and even food. With this, the idea of a nation has been constructed among the Tibetan diaspora who imagines Tibet as a country they can always dream about.

Tenzin adds that the term ‘refugee’ should not be seen negatively but rather as a source of inspiration meant as hope, dream, and freedom. He strongly believes that non-violence is the answer to the freedom of Tibet. Aside from this, Tenzin explains that the Tibetan government in exile practices a form of democracy and holds an election every five years and encourages Tibetans all over the world to participate. They have set up more than hundreds of schools and monasteries and sees these as key centers of learning to preserve Tibetan culture and teachings. Tenzin voices out that the freedom movement sees survival as an act of resistance.

Wangden also mentions the different forms of resistance which are happening inside Tibet such as Tibetans making clear that they are different from the Han Chinese occupying their lands by starting movements such as only shopping in Tibetan shops while some writers and singers would write songs on issues about Tibet. He describes how the nomads in remote areas of Tibet are not as politically motivated as they are far from the Chinese occupied cities. But as how Britain was in Africa, China tries to disguise their neocolonial motives in forms of ‘development’ through forced settlements of particular areas and forced civilization of ‘barbaric’ Tibetans. Therefore, the biggest resistance is the resistance to giving away land to China.

Professor Dibyesh also questions what type of freedom do they envision for Tibet, “Total independence from PRC or autonomy within PRC?” Tenzin answers that the Tibetan Government in Exile adapts Dalai Lama’s idea for Tibet to have genuine autonomy with arrangements with China in order for Tibetans to exercise and have self-governance over their health, culture, and religion. He adds that this proposal was sent to the Chinese government but has been pending for 40 years. Tenzin also explains that though the Tibetan struggle’s political standing may change over time from the 1950’s till the present day, the Tibetan freedom struggle follows the same method of commitment to non-violence. “Resistance is constantly happening, and Tibetans are speaking through similar voices through time though the media makes it seem like this is new.”

Finally, Professor Dibyesh closes the discussion with the question, “Being a writer, how do you think words can inspire generations and how can Tibetan supporters work in solidarity?”

Tenzin eloquently answers that solidarity, intellectual understanding, and emotional healing may be practiced to deal with the victimization Tibetans have experienced by seeing the ‘enemy’ in a different perspective. Through this, the ‘enemy’ is seen as a challenger, and the biggest challenge is to consistently engage with the enemy rather than being harmed by the enemy. Through this, we are also healing the enemy. Additionally, by having interviews and dialogues, we can learn and better understand each other. Tenzin strongly believes that writing is a very powerful tool as writers have the power to tell stories and change stories. He shares his refugee experience with a poem he wrote himself entitled “Refugee” (This is just a part of the poem).

There is an R embossed

I scratched and scrubbed,

on my forehead I found

A brash of red pain.

I am born refugee.

I have three tongues.

The one that sings

Is my mother tongue

The R on my forehead

Between my English and Hindi 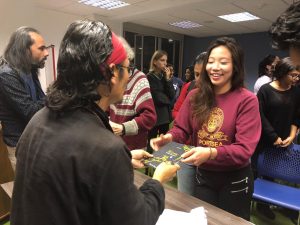 Freedom means Rangzen in Tibet. Tenzin sees that his constructed identity of a refugee meant that those who are born refugees are born from freedom. He adds that at the time of globalization, without using military movements, we are able to lead a non-violent struggle that paves a positive imagination for the future. Tenzin expresses that freedom in terms of acquiring pleasures of the world is a colonial mindset and Tibetans believe that the source of real freedom is found inside ourselves through love and compassion. The freedom struggle starts with the individual because of the hope they have for the future they imagine to achieve, amidst the fluttering Buddhist prayer flags in the wind, freely.