Skip to content
Loading...
Latest news
Positive Changes in Inclusive Development Policy of Vietnam Government with Giay Ethnic Minority in Sapa Over the Past Years
Vietnam’s Strategy in Fighting COVID-19 Pandemic
Raising Awareness for Young People about Sustainable Environmental Protection
Vietnam, From Teaching Each Other Our Cultural Dance Moves To Introducing One Another To The Varying Tastes In Music
Mental Healthcare Amid The Pandemic In Vietnam
How Has Climate Change Impacted Vietnam?
Vietnam’s Spectacular Development
Interning with DEN: Reflecting on my Experience
My Vietnam Perspective and Experience
Vietnam: A County with 2000 Different Islands and Beautiful Landscape
Virtual FieldTrips

Before visiting Vietnam my perception of the country was tainted by the western image of the Vietnamese war. This also led to an understanding that the country was far from developed and many lived in poverty. Therefore, my goal was to explore the culture and society of Vietnam to find out more about how women specifically have been affected after the implementation of the 1986 Doi Moi (reform) policy. The major goal of this reform was to create a socialist – orientated economy. Consequently, this has led to substantial effects on equality in all sectors from Gender, Religion, and Race. Furthermore, after visiting the country I can truly express that I have touched and felt the politics of Vietnam in its most natural form. Though plagued with a consistent image of war, the country was nothing like the stereotype built on its communist nature.

“Chào mừng bạn đến Viet Nam” welcome to Vietnam one of the most wholesome and open-hearted countries I have ever visited. From busy roads to bustling night markets. Hanoi had taken me by surprise, although people have such little, they were prepared to give a lot more. Especially the students at Hanoi university who welcomed us with open arms and allowed us to feel a part of their community and share their experiences and knowledge with us. I had many opportunities to analyse and observe gender perspectives within different parts of the Vietnamese lifestyle. Through this, I was able to experience and learn more about the politics of Vietnam and how it affected ordinary people. A very important part of this trip was being able to visit the United Nations house in Vietnam and openly discuss gender development and women empowerment within Vietnam. I was also lucky enough to interview former United Nations Ambassador Nguyen Quy Binh about his views on the laws and regulations which have improved Vietnam’s gender struggle.

The rapid change of Doi Moi has created many challenges for the Vietnamese people, especially women. In this blog post, I have included a picture taken during our trip, which represents a reoccurring pattern I had seen in the workforce in Hanoi, Vietnam. Despite being one of the busiest capitals cities with a high business sector, there were a lot of women and young girls working as street vendors or in other low wage jobs. Regardless of the “Gender equality” laws, which indicates that “man and woman have equal position and role; are given equal conditions and opportunities to develop their capacities for the development of the community, family and equally enjoy the achievement of that development.” This led to my speculation that there must be a working dispersity between men and women where men are offered higher-paying roles than women. Whilst addressing this to the United Nation Ambassador, Mr Binh stated “there are many times when men have been favoured over women in the selection of a job due to women having “issues” such as maternity leave.” This indicated that women are still at a disadvantage when it comes to applying for the same job role as their male counterpart. 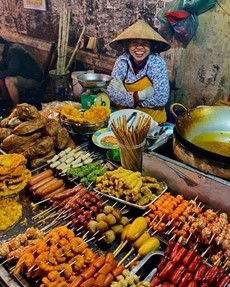 After the Doi Moi reforms, there were 44 out of 120 laws made which benefited women and worked towards gender equality. Although Mr Binh states that many of these laws have been put into practice, it is evident that there is still a lot of room for improvement in regard to gender wage equality. For example, a lot of women in rural areas are paid lower wages than men even in the same jobs. Women in Vietnam earn on average 3 million dongs less per year than men, which is about one month’s income. The magnitude of this gap remained constant between 2011 and 2014. This shows us that despite women being at a higher literacy level than men there is still a persistent gap this is mainly due to women working in lower-paid occupations. Although there have been predominantly negative impacts of the economic reform there has been an impressive growth of light manufacturing exports, which is a sector mainly dominated by women. For instance, the exports of the garment industry accounted for almost a quarter of total manufacturing exports over the past 15 years. This sector is one of the major employment sources for female workers, including rural female migrants. This shows that even though agriculture exports may have decreased over time the products are still a big part of the service, this has also created more income generated actives for women.

Before Doi Moi, many girls were less likely to attend school or university compared to boys. Data produced on UNESCO (2019) in Vietnam shows that the “female rate of enrolment in education has increased from 20.31% in 2009 to 31.72 in 2016 ‘the literacy rate among women is 90.6% compared with 95.3% among men’. Gender inequality has made a massive improvement and been able to decrease over time. However, attending university is still a huge privilege for Vietnamese students. Whilst in discussion with most Vietnamese students at Hanoi university I found out that nearly all of them have a job if not one then two jobs to provide their tuition fees. One female student I spoke to worked in vets and tutored English whilst taking up extracurricular activates. She expressed how this is very stressful at times however without her two jobs she would not be able to attend university.

I believe that Vietnam is moving forward to a bright and equal future, however, after witnessing the working and living culture of women and young girls in Vietnam, they still have a long way to go. This is mainly due to the socio-economic state that they are in, struggling with gender-based violence, working conditions and low education rates which all coincide. Most importantly Vietnam must focus on implementing the laws and regulations that Doi Moi has bought about. For example, the United Nations Women who have applied strategies and projects such as project change-makers of youth, HeforShe campaign, project safe cities all working towards economic empowerment for women. Although it is beneficial to have open conversations like these, it is also necessary to educate all citizens on gender equality starting from a young age. I was surprised to find out that only private schools are offering this within their criteria as it affects everyone in a society. The achievement of Education on gender equality has had effects on decreasing the patriotic attitudes within a household or work environment. After exploring the implications of Doi Moi, I do believe that it has bought about a considerable amount of awareness towards gender equality. Finally, it has allowed women to feel empowered and establish their gender equality rights within their day-to-day routine.