Skip to content
Loading...
Latest news
Returning to Kazakhstan in the Middle of the Global Pandemic: Reflecting on My Experience
Covid-19: Virtual Field Trip to Vietnam
Positive Changes in Inclusive Development Policy of Vietnam Government with Giay Ethnic Minority in Sapa Over the Past Years
Vietnam’s Strategy in Fighting COVID-19 Pandemic
Raising Awareness for Young People about Sustainable Environmental Protection
Vietnam, From Teaching Each Other Our Cultural Dance Moves To Introducing One Another To The Varying Tastes In Music
Mental Healthcare Amid The Pandemic In Vietnam
How Has Climate Change Impacted Vietnam?
Vietnam’s Spectacular Development
Interning with DEN: Reflecting on my Experience
Virtual FieldTrips

After its COVID-19 successes, Vietnam is well positioned to play a more proactive role in global governance. At the national and global level, climate change is always considered an urgent issue that affects the process of sustainable development worldwide. Climate change impacts are becoming the cause of climate security challenges. Vietnam is considered as one of the countries heavily affected by climate change, due to its geographical location. One of the most effective ways for Vietnam to be more resilient to such threats, is by engaging more in regional and global governance activities aimed at resolving various issues such as rising sea levels, high levels of floods, droughts and storms.

In fact, according to Vietnam’s climate change scenarios, by the end of the 21st century, there would be about 40% of the area of the Mekong Delta, 11% of the Red River Delta, and 3% of other coastal areas flooded. At that time, about 10-12% of Vietnam’s population would be directly affected. In particular, Ho Chi Minh City will be flooded over 20% of its whole area. This would cause a range of negative changes, especially the large-scale displacements of the population. 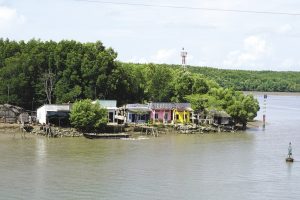 On the other hand, due to the impact of climate change, the frequency of large-scale extreme weather events has been higher in Vietnam in recent years. In the Mekong Delta and the Central region, drought continued to recur in 2019-2020 on a larger scale and even greater than the 2016 saline intrusion drought. Rivers and streams in the Central and Tay Nguyen (highland region) would continue to decrease and would be deficient by 70% to 35% compared to the average of former years in the same season. Moreover, hurricanes of categories 4 and 5 have been much more frequent in the past 35 years, and abnormal phenomena of climate and weather have occurred continuously in many regions, causing landslides and large scale flash floods causing great devastation. Such as, in Yen Bai province (2017) and in the Thanh Hoa Province (2018). In addition, historical heavy rain(s) over the lasr 60 years caused great damage to Ha Giang (Northeast) and some localities in the North. Especially, recently, the Central region has had to endure natural disasters: floods and storms with huge losses of people and property. 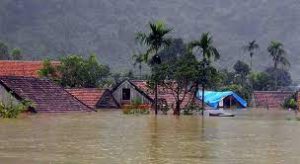 The impact of climate change on production is most evident in the agricultural sector. In Vietnam, because of the tropical monsoon climate, rice is the main agricultural crop. Specifically, according to the average estimate of the General Statistics Office, in 2016, drought and saltwater intrusion affected 527.7 thousand hectares of rice, of which about 44%  was completely damaged. For other crops such as fruit trees, crop yields will decrease by about 50%. Climate change also affects livestock, forestry, biodiversity, wetland ecosystems, aquaculture, etc., so it is necessary to have access to the new and more comprehensive theories in the context of agricultural production affected by climate change

It is obvious that Vietnam has been negatively affected by climate change in recent decades.  Thus, if Vietnam does not have a long-term vision, climate change threatens the implementation of the poverty reduction, and sustainable development goals of this coastal country.