Skip to content
Loading...
Latest news
My Experience of Living and Studying During Covid-19
Authoritarian governments and COVID-19
7 things I have learnt during my time in lockdwon
Being far from home during the pandemic
My Education Journey from Tbilisi to London During Coronavirus
Let Lockdown and curfews be a lesson into the lives of Palestinians
Covid-19: A game changer in the US election
What is black history month and why does it matter?
Romania, Covid-19 and the post-Westminster “Good Life”.
What is Black History Month?
DENGlobal

Recently students of University of Westminster from the Department of Politics and International Relations got a chance to visit the gorgeous city of Tbilisi in Georgia. A group of students along with Dr. Farhang Morady went to visit St. Andrew the First-Called Georgian University of the Patriarchate of Georgia (SANGU) along with Transparency International Georgia and a few other institutes such as that of the Parliament of Georgia. Students were given a very warm-hearted welcome by the people of Tbilisi and SANG. Known for their hospitality they truly lived up to all we had read about it. Special thanks to the incredibly capable interpreter, David Kenkadze and most hospitable of hosts, Giorgi Tsiklauri.

We all had some very different opinions about Tbilisi before our trip, having been ruled by different kingdoms over the centuries it was difficult to picture the fusion of Persian, Turkish, Russian and Georgian culture. Georgia was nothing like we could have imagined the stunning green landscape and rivers that surround the city of Tbilisi is serene. 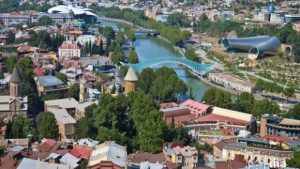 Walking through the streets of Tbilisi you don’t just realize how beautifully the city has preserved the Georgian Christian culture but also how every Georgian is in love with their country. We got an opportunity to not only learn more about Georgia from the students of SANGU, local people but also the Vice Prime Minister Minister of Foreign Affairs Mikheil Janelidze and Sofio Katsarava, Chair of the Foreign Relations Committee were kind enough to spare some time from their busy schedules for our students. We had very interactive sessions with both where we covered several wide-ranging topics like the Russian threat, Georgia’s EU aspirations and the development of the country. 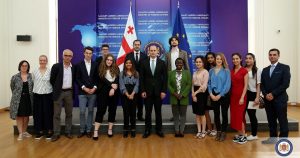 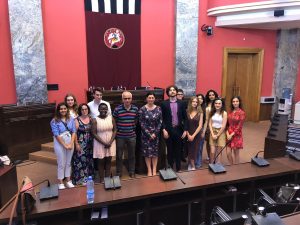 Another very exciting session we had was with Transparency International Georgia where we discussed the history of corruption and political transparency of Georgia.  Through this trip, we learned not only more about Georgia but also about the Caucasian region and how Georgia is one of the strategic leaders of the region. It was very interesting to learn about the inclusion process of Georgia to the EU given that it might play an instrumental role for EU in the region.  Tbilisi was a perfect combination of beautiful landscapes, green mountains, and amazing people. I thoroughly enjoyed my visit and left my heart in the city of Tbilisi. The beautiful architecture of churches and the Georgian wine are complete bliss. It was astonishing to see the love people have for their country and visitors. 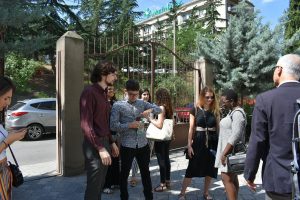 Overall, personally, I feel that the field trip to Georgia is a very thought-provoking way to learn about one of the strategically important regions of Caucasia. Given the rise of Russia’s influence in the world, I believe it becomes very important for the students studying Politics and International Relations to not only study the region but also Georgia as being one of the countries to join EU soon.