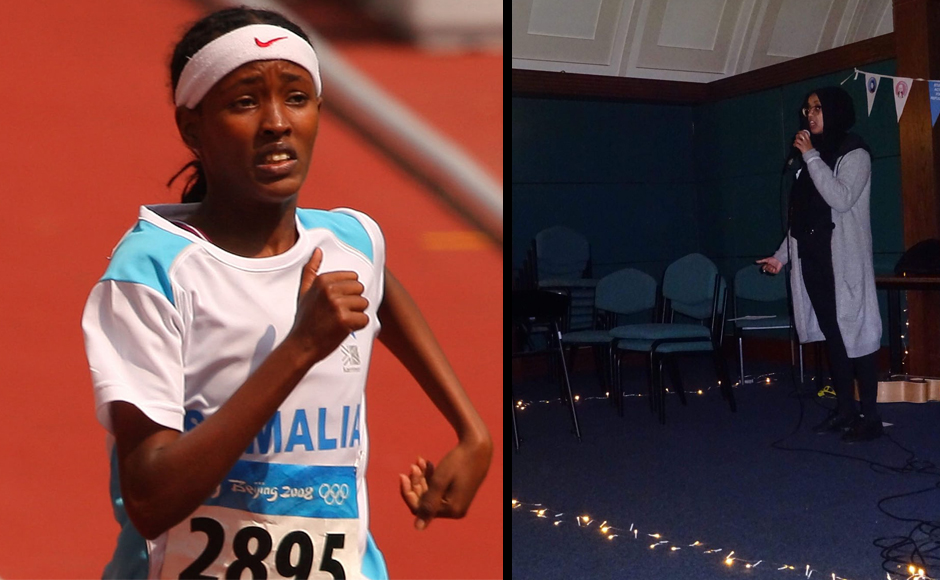 (The following spoken word poetry was performed at a Student Action for Refugees (STAR) event held at the University of Westminster on the 7th of December, 2017. To read the poet’s reflection on the piece click here. If you want to know more about Samia Yusuf Omar and her life, you could begin here)

What forces a person to leave their life behind, is far bigger than what you can could ever possibly find on the news.

You see, to be a refugee is not a choice; voice-less is what refugees become.

Ambitions put on hold, dreams deferred in search for life over death.

For most, this is a matter of life and death.

We all seek to make home in what we know, eat from what we build, rejoice in what we sew.

But only few witness souls reduced to flesh, childhood memories turned to rubble, entire neighbourhoods transformed to sites for war.

This is not political, detached from humanity.

This is personal, the basic evasion from mortality.

No one chooses to be stuck in systems and documents.

No one chooses to be trapped between sentiments and continents.

The Mediterranean sea has become a graveyard for far too many unnamed: dehumanised.

There’s nothing humane about 200 bodies on a boat with maximum capacity of 20.

Nothing humane about turning back boats from where they came.

My own cousin Ismail a victim.

The crisis at present, resembles that of the past but ask yourself how far removed we really are.

Cause after the Holocaust, they swore never again. Yet, here, we are, again!

My generation knows tragedy too well.

I was born in the shell of the city of Mogadishu.

What about the tragedies of Burma, Yemen, Syria and Iraq.

Our generation desensitised, comfortable in pockets of politicians.

Lemme tell you, there’s no virtue in safeguarding national identity at the cost of human lives.

No integrity in protecting borders when people are dying at your door.

No humanity in refugee camps also dubbed as jungles.

She died before she could ever see her dreams realised.

Her desire and hooyo’s duco once pushed her through to China.

But this time it was her against the world: a place unkind to girls like us.

But was unseen: her slim and frail figure eclipsed by the privilege of women with means.

On that memorable night, everyone stood up for her in that final 200m race.

But on that fateful day, no one stood up for her in Her final moment: alone, in between two coasts far from anything remote.

I wonder what hope there was for the “unknown” 26 African girls found floating near Italy, if an Olympian too can get swallowed by the sea.